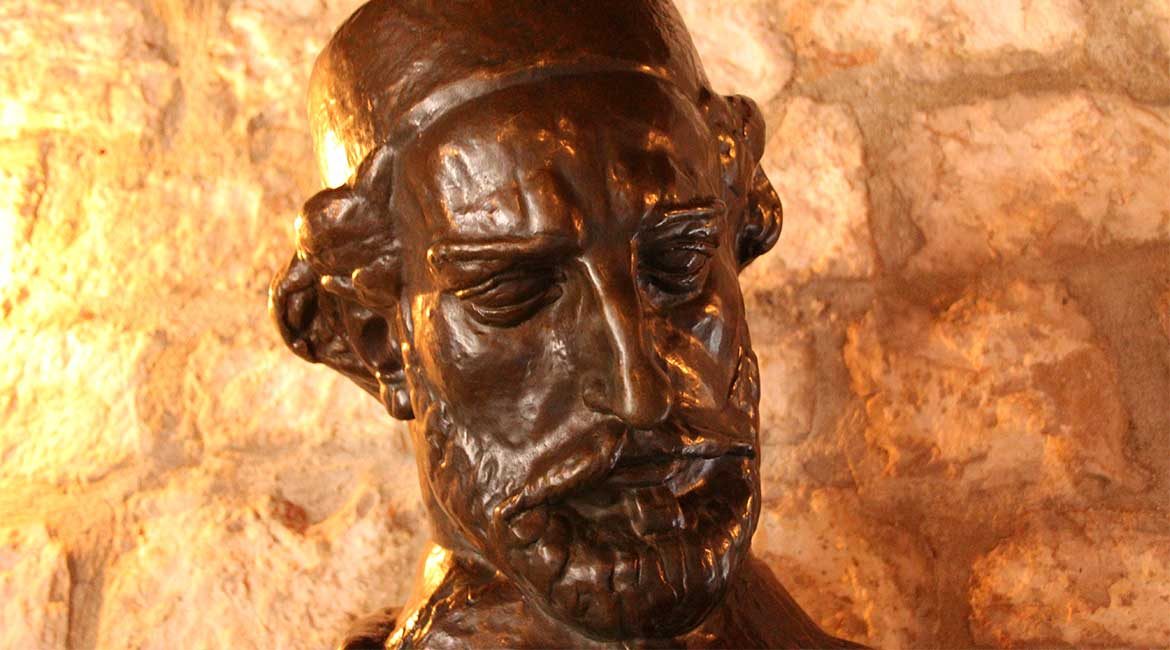 A very important dimension of Montenegrin culture is the ethical ideal of Čojstvo i Junaštvo, roughly translated as “Humanity and Bravery”. Another result of its centuries long warrior history, it is the unwritten code of Chivalry that stipulates that to deserve a true respect of its people, a person has to show virtues of integrity, dignity, humility, self-sacrifice for the just cause, respect for others, and Rectitude along with the bravery. In the old days of battle, it resulted in Montenegrin’s fighting to the death, as being captured was considered the greatest shame.

This code of conduct is still very much ingrained, to greater or lesser extent, in every Montenegrin’s ethical beliefs system and it is essential that it be kept in mind in order to truly understand them.

Most of extraordinary examples of Montenegrin conduct during its long history can be traced to the code.

An absolute institution in the Montenegrin Culture. You are ‘allowed’ to miss someone’s wedding, but not coming to their funeral will be remembered.

The traditional dance of Montenegrins (and Herzegovinian Serbs) is called the Oro, Dinaric-Serbian venacular for Orao or “Eagle” – it also known as the Crmnički Oro – due to its believed origin in the Crmnica region.

It is as much a communal gathering and a game as it is a dance in the strictest sense. Typically, young men and women would gather and form a circle (kolo), then start to sing, usually in form of playfully mocking someone from the other side and daring them to enter the circle to dance. One of the more daring young men would then enter the circle, and start to dance in a stylistic imitation of an Eagle. The aim here is to impress. The gallery crowd will immediately respond with a “feedback” song, either praising or ridiculing him.

Soon, a girl would join, quite often his girlfriend or possibly someone attracted by his display. She would also imitate an Eagle, but in a more elegant way. The gallery also keeps up. When the couple gets tired, they kiss each other on the cheek and another couple jumps into keep the kolo going, while the singing of the surrounding crowd never stops.

Usually the young lads finish oro by forming a two-story circle, standing on one others shoulders, inside the greater circle, and this is the scene that is the most recognizable and most often photographed part of the dance.

Musical instruments are never part of the true Oro.

A dance of Albanian origin that Muslim Montenegrins dance is the shota.

This dance is done at weddings and gatherings between men and women. The dance consists of intricate fast-moving steps, the man and woman moving closer and farther away from each other in ordinance with the fast-paced rhythm, while dancing, it is common for the woman to shake her handkerchief up in the air while performing the steps.

While this dance is performed, it is usual for drums to play and other instruments, while the audience clap rhythmically to the beat. This dance is done mostly in the Sandzak region of Montenegro.

The Montenegrin National Theater in Podgorica is the only professional theater, and along with the Faculty of Drama, located in Cetinje is responsible for the majority of theater productions in the country. During the summer months, City Theater in Budva takes precedence as a stage for performers coming from all corners of former Yugoslavia and the world.

Many scholars believe that the biggest contribution to Montenegrin music in theater was the one from the Italian composer who spent the most part of his life in these areas: including Dionisio de Sarno San Giorgio. With his “Balkan Empress” – inspired by the work of King Nikola, got all the praises of Italian critique in the second half of the 19th century.

Considering its population of about 600,000 people, Montenegro has produced a number of outstanding film directors and actors including Dušan Vukotić, the first Yugoslav Oscar winner (for the short animated film category in 1961), Veljko Bulajić, and Živko Nikolić.

The music of Montenegro has been relatively under-looked, especially in comparison with its literature and visual arts. Nevertheless, the 20th century produced several outstanding composers and interpreters. Specialized Musical High Schools in Kotor and Podgorica, were the pillars of the classical music education, the latter being upgraded to the rank of Academy in the last decade of 20th century. Particular attention is given to Choir and Chamber music. In addition, a professional orchestra is maintained by a national TV in Podgorica.

Montenegrins’ long-standing history of struggle for freedom and independence is invariably linked with strong traditions of oral epic poetry. Traditionally, they are delivered to the audience accompanied by the music produced by gusle, one-string instrument played by the story-teller (guslar), who sings or recites the stories of heroes and battles in decasyllabic verse. Historically, these songs have had an immense motivational power over the population. The guslars commanded almost as much respect as the best of warriors, as they were as much the authors, thus history writers, as they were interpreters.

In the best “traditions” of the modern public domain and open-source movement, these songs had been composed and passed on by the unknown guslars since high middle ages on wards. Other guslars adopted the songs and could amend them as they saw fit, which usually resulted in a number of slightly different versions of the same story, of varying quality. The “quality control” were the listeners themselves, who loudly objected during the performance if some parts of the story were inaccurate or embellished out of proportions. The guslars had had more “poetical freedom” when they interpreted the events further back in the past, as there could have been no witnesses present. Thus, the historical accuracy of the song declined with the widening of the time gap. Most of the songs have been collected, assessed, and recorded on paper by Vuk Karadžić in the 19th century, along with Serbian epic poetry, some being of exceptional literary quality.

The most famous recorded Serbian Guslar-interpreter was indisputably Petar Perunović Perun, from Pješivci tribe. He was known as a great Montenegrin Serb, who traveled with heroic Serbian army during Great war, 1914-1918. He reached his peak during the first few decades of the 20th century, when he made numerous recordings and tours in America and all across Europe.

The most popular Montenegrin epic song heroes are Bajo Pivljanin, Nikac od Rovina, and pop Milo Jovović. Contemporary alternative rock author Rambo Amadeus proved with his Smrt Popa Mila Jovovica (The Death of Priest Milo Jovovic) that these songs can be very successfully adapted to the modern art format without losing any of its original appeal.

Presently, these traditions are somewhat livelier in the northern parts of the country (also shared with people in eastern Herzegovina, western Serbia, and central Dalmatia).

The traditional dishes of Montenegro’s heartland, and its Adriatic coast have a distinctively Italian flavour which shows in the bread-making style, the way meat is cured and dried, cheese-making, wine and spirits, the soup and stew making style, polenta, stuffed capsicums, meatballs, priganice, japraci, raštan, etc.

Hungarian dishes include goulash, satarash, and djuvech, which are also very common.

Last but not least, Croatian cuisine made its mark mostly in the desserts department. Additionally crêpes, doughnuts, jam, myriad types of biscuits and cakes, all make a contribution to the average Montenegrin’s waist-line. Vienna-style bread is the most prevalent type of bread in the shops.

Montenegrin cuisine also varies geographically; the cuisine in the coastal area differs from the one in the northern highland region. The coastal area is traditionally a representative of Mediterranean cuisine, with seafood being a common dish.

Montenegro has a number of significant cultural and historical sites, including heritage sites from the pre-Romanesque, Gothic and Baroque periods.

The Montenegrin coastal region is especially well known for its religious monuments, mostly related to Venetian architecture, including the Cathedral of Saint Tryphon, the basilica of St. Luke (over 800 years), Our Lady of the Rock (Gospa od Škrpjela), the Savina Monastery, and others. The ancient city of Cattaro or Kotor stari grad (now called Kotor) is listed on the UNESCO World Heritage list, even as a perfect example of the Venetian architecture.

The Byzantine influence in architecture, and in religious artwork is especially apparent in the country’s interior.

The first literary works written in the region are ten centuries old, and the first Montenegrin book was printed five hundred years ago. The first state-owned printing press (Printing House of Crnojevići), was located in Cetinje in 1494, where the first South Slavic book was printed the same year (Oktoih). A number of medieval manuscripts, dating from the 13th century, are kept in the Montenegrin monasteries.

The coastal Montenegro (called for centuries Venetian Albania) was heavily influenced by Renaissance Italy, mainly in literature. Ludovico Pasquali, Giovanni Bona de Boliris, and Giovanni Polizza were the main representatives in those centuries.

On the substratum of traditional oral folk epic poetry, authors like Petar II Petrović Njegoš have created in the last two centuries their own expression. His epic Gorski Vijenac (The Mountain Wreath), written in the Montenegrin vernacular, presents the central point of the Montenegrin culture, for many surpassing in importance even the Bible.

The painters from Montenegro gave a great contribution to the affirmation of the Montenegrin culture in the world. Leaving to the other parts of the world (Paris, Belgrade, Zagreb), they took their Montenegrin soul and heritage with them, and passed it down to others through their artworks. The last 15 years saw the opening of the Faculty of the Fine Arts in Cetinje, bringing up a whole new wave of talent.