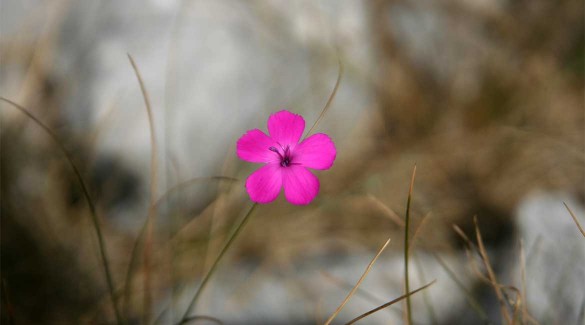 The number of plant species in the Balkan peninsula has been estimated at well over 6500 – a figure that includes numerous endemics and several species that have survived from before the last Ice Age. Along the Montenegrin coast, typical species include Aleppo pine (Pinus halepensis), holm oak (Quercus ilex), funeral cypress (Cupressus sempervirens) and olive (Olea europaea), together with maquis. On the steep mountain slopes and karst areas above, these rapidly give way to species such as white oak (Quercus pubescens), holly oak (Quercus coccifera), hop-hornbeam (ostrya carpinifolia) and hardy scrub or garrigue. Flowering plants in these areas include thyme (Thymus striatus), common sage (Salvia officinalis) and several species of crocus.

The flora of Montenegro is one of the most diverse of any comparable-sized temperate or subtropical region in the world. Among the endemic species found in such areas are Moltkia petraea, Petteria ramentacea, Globularia cordifolia, Lonicera glutinosa and Tanacetum cinerariifolium or ‘Dalmatian powder’ – better known as pyrethrum. Inland, the lower reaches of valleys and canyons are characterized by deciduous forest including ash (Fraxinus excelsior) and various species of oak. At higher levels these increasingly give way to beech (Fagus silvatica) and then conifers. Canyons may also contain a number of Tertiary relics. The mountain slopes of inland Montenegro are dominated by coniferous, beech or mixed forest. Species include Norwegian spruce (Picea abies), silver fir (Abies alba), Aleppo pine (Pinus halepensis), beech (Fagus silvatica), birch (Betula pendula) and maple (Acer heldreichii). Black pine (Pinus nigra), and massive Munika or Heldreich pine (Pinus heldreichii) and its subspecies the Bosnian pine (Pinus leucodermis), are also found. Rich sub–alpine pastures and grasslands extend above the tree line, as do areas of scrub, sometimes dotted with juniper (including Juniperus communis).

Upper mountain slopes are characterized by hardy, low thickets of dwarf mountain pine (Pinus mugo), known locally as klek, above which typically rises an area of bare rock. The high grasslands are rich in flowers such as milkworts (including Polygala major), flaxes (including Linum capitanum), violets (Viola calcarata) and gentians (including Gentiana acaulis and Gentiana utriculosa), together with saxifrage (Saxifraga adscendens), black vanilla orchid (Nigritella nigra) and various species of sage and thyme. Blueberries grow in profusion during the summer months. In rockier areas and on screes, species include valerian (Valeriana Montana), ranunculus (Ranunculus sartorianus), alpine toadflax (Linaria alpine), alpine rock-cress (Arabis alpine) and drypis (Drypis spinosa). Snowbells (Soldanella alpina) and mountain avens (Dryas octopetala) are found among the melting snowfields. Flowers endemic to Montenegro and adjacent areas of the Balkans include Verbascum durmitoreum, Centaurea kotschyana and Pimpinella serbica. The best months to see the flowers are June and July.