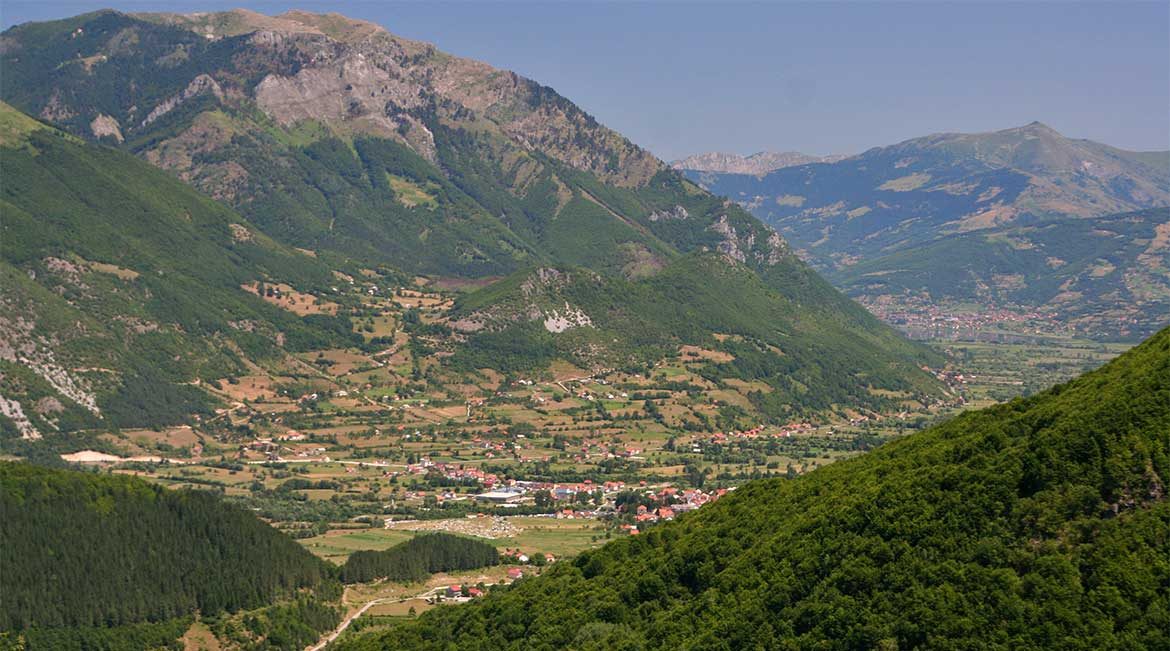 Gusinje is a small town and municipality in North-eastern Montenegro. The town has a population of 1,704. The name Gusinje is derived from the word Guska meaning goose. It’s older name was Gousino. In the Ottoman period, it was known in Turkish as Gusna. In Albanian, it is known as Gucia. The town is located in the Plav and Gusinje ravine of the Prokletije range, at an elevation of ca. 1,000 meter.

Yugoslav researchers have tried to connect the Plav and Gusinje ravine to the medieval župa (county) of “Guseimo” mentioned in the Chronicle of the Priest of Duklja as part of “Podgorje”. Some researchers believe that the county was situated in Upper Polimlje, which includes Gusinje. It is known that a medieval settlement was located in the territory of present-day Gusinje. Gusinje was mentioned as a village, one of the caravan stations on the Kotor–Scutari–Podgorica–Peć road, in the 14th century. It was mentioned in the 1485 Ottoman defter.

In the beginning of the 17th century, before 1611, the Gusinje fortress was built at the locale of the medieval settlement, at the wreath of the Prokletije. From the mid-17th century the Kelmend tribe from northern Albania and the Kuči tribe began arbitrarily settling the Plav and Gusinje ravine, competing with other Serbian and Muslim Albanian immigrants from Malësia and Montenegro, that were predominantly Serbian speaking. The small towns of Plav and Gusinje were also of mixed population, whose mother tongue was Serbian. The province was inhabited by a Serbian population including to a lesser extent a Muslim population of Serb origin and language and an Albanian population.

The Plav and Gusinje region was the site of several battles in 1879 and 1880 between the pro-Ottoman Albanian nationalist League of Prizren and Montenegrin forces, following the Congress of Berlin in 1878. The Congress had decided that the Ottoman districts be ceded to the Principality of Montenegro, which was met with outrage from Albanian nationalists, who founded the Ottoman-backed League of Prizren. The Ottomans provided arms to the local Muslim population, and also sent regular troops. Ali Pasha of Gusinje, a leader in the organization, mobilized Albanian irregulars to attack the Montenegrin forces that had been consequently stationed in the region. After initial success, the Albanians were defeated by Montenegrin forces led by Marko Miljanov, by early 1880. But, Gusinje remained hands in Ottomans and Ülgün was ceded as compensations.

The districts were de facto part of the Sanjak of Novi Pazar (Kosovo Vilayet) between 1877 and 1913. Montenegro finally took it 1912 at First Balkan War. Montenegrin conquest was recognized by Ottomans in 1913. In 1967, the settlement was described as “of the Oriental-type, high climatic summer resort”, which due to its remoteness and frontier location was not committed to sufficient attention by the government.

The founder of modern-day Gusinje was Dedë Shala, an Albanian Catholic. In 1455, Shala converted to Islam and became known as Omer-aga Shala. Shala was then awarded lands throughout the region from Ottoman authorities. His son, Hasan-aga Omeragaj built the first house in Gusinje upon the Grncar river, creating the Omeragaj branch in Guciae. His other son, Tahir-aga Omeragaj created the Omeragaj branch in Plav. The Omeragaj who later Slavicised to Omeragići family was the ruling family of Gusinje from 1461 up until the arrival of Veli Beg and his sons Ahmed, Redzep, and Ibrahim, who Persians of Turkic origins that settled in Gusinje from Khorasan in 1590. From Veli Beg’s son Redzep Pasha sprung the Redzepagic family, which grew to become one of the most prominent families in Gusinje for the remainder of Ottoman rule. According to Ottoman documents in Istanbul, dated from 1852, Gusinje was part of the Vilayet, or province of Kosovo. From the late 15th to early 18th century many families from various parts of the Islamic World immigrated to the Vilayet of Kosovo.

These documents from Istanbul show that families immigrated from Islamic Spain after the expulsion of the Muslims and Jews from Granada in 1492 to the Ottoman domain some settled in Gusinje. There were also a few Turkic families that settled in Gusinje during the 17th century. Throughout Turkish rule, many Albanians converted from Roman Catholicism to Islam. The majority of the citizens of Plav and Gusinje were of Albanian origin, hence the majority of the population was Catholic at the time, with the exception a few Eastern Orthodox families. By 1700 over 75% of the inhabitants of Plav and Gusinje embraced Islam. Turkish rule was passed onto Montenegro by decision of the Congress of Berlin in 1878. However, this decision was unpopular among the local population and between 1878 and 1912, Plav and Gusinje existed as a de facto independent state.

There are many bistros in the town, serving mainly Balkan specialities called ćevapi. On the main road there is a sweet-shop serving great cakes and sweets and also coffee prepared in cezve for very reasonable prices. The Springs of Ali Pasha or Alipašini izvori, named after Ali Pasha of Gusinje, are the premium attraction of the town. The river emerges directly from a rock in many small springs. This place is particularly busy on August 2 which marks the independence day of Gusinje. In addition to the springs, there is the  national park Prokletije in the vicinity.

Almost all visitors to Gusinje come to the city to go hiking in the park of Prokletije. The Prokletije park is the youngest park in Montenegro and the least known. Most visitors who want to visit the mountains of Montenegro choose largely the more famous Durmitor, which is also easier to reach. However, the mountain range of Prokletije certainly does not fall under the Durmitor mountains, and according to many is even more beautiful. This is always a question of taste, of course, but it can not be denied that Prokletije is much rougher and less accessible. So most of Gusinje’s visitors are also the more experienced mountain hikers who look for more challenge and a less visited place. 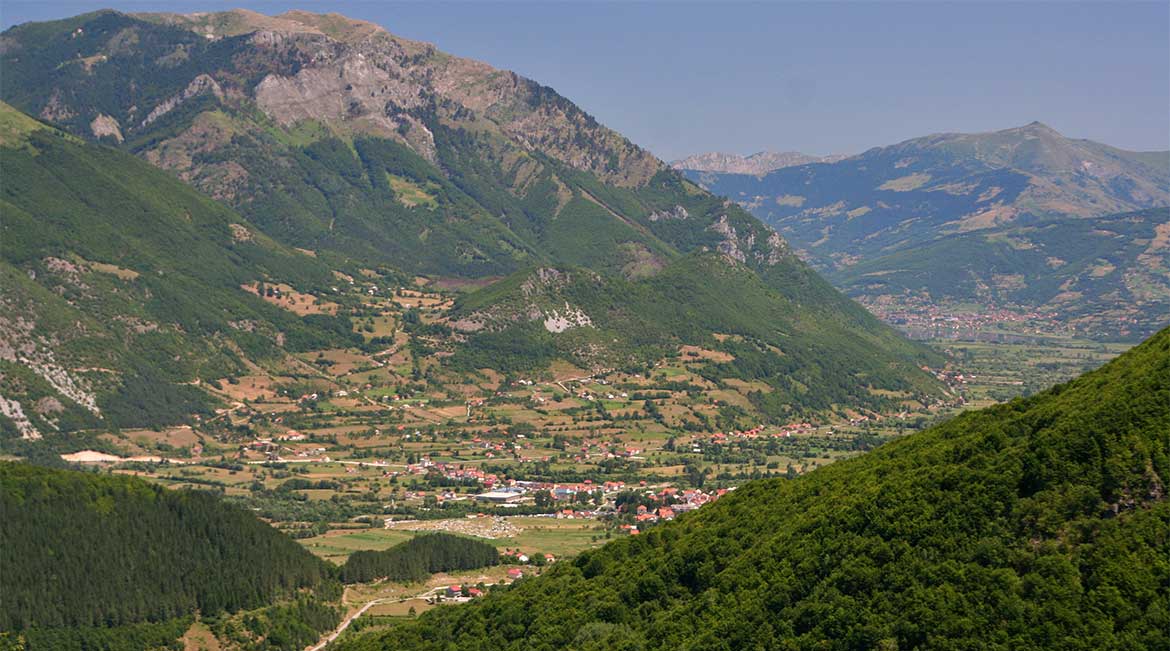