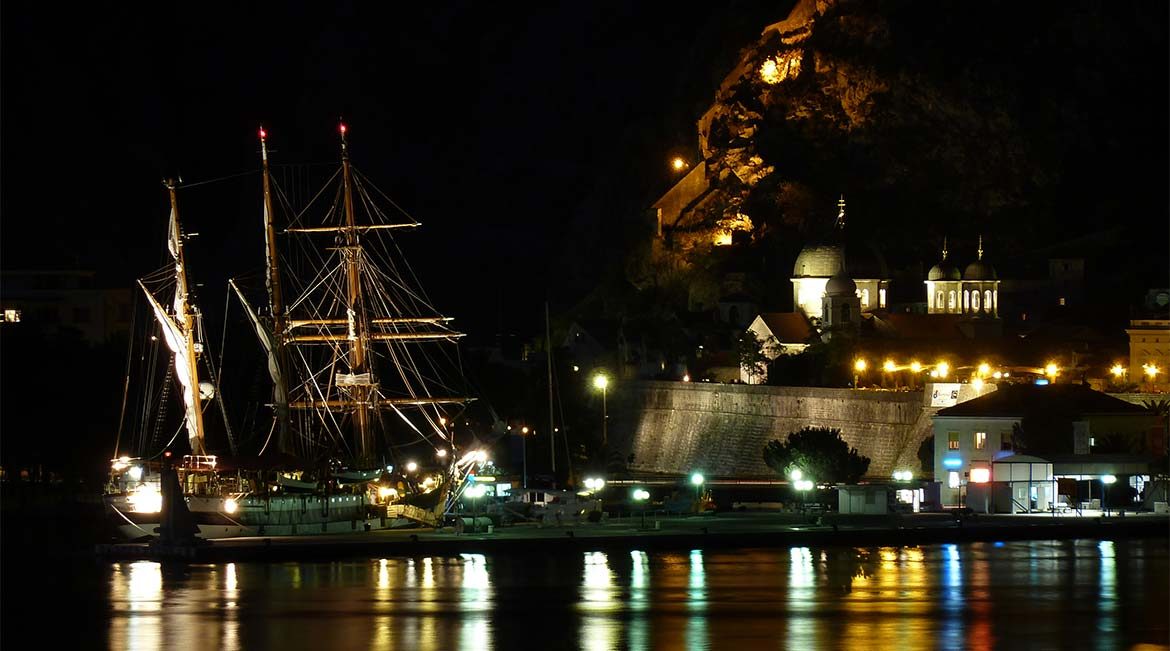 Jadran is a training ship powered both by sail and internal combustion built for the navy of Yugoslavia and now owned by the navy of Montenegro. It was built in Hamburg, in the HC Stülcken & Sohn shipyard, and launched on June 25, 1931. The construction cost 8,407,030 dinars, or 622,743 RM, and was funded in part by the Jadranska Guard maritime organization and in part by a loan taken from the Navy war reparations.

On 16 July 1933, at 10.00 hours, the ship arrived in Tivat, and was commissioned into the Yugoslav Royal Navy on 19 August 1933, although the commissioning ceremony which included a salute with cannons was held only on 6 September at Split. The ceremony, which lasted three days, was attended by representatives of the political and military leadership from the whole country. The ship joined the Adriatic fleet on 25 June 1934. The vessel cruised several times in the Mediterranean Sea, and in the Atlantic Ocean three times. During the German invasion of Yugoslavia in April 1941, the ship was based at Boka Kotorska, in the Đenovici. The ship commanded underwater weapons, and South sector of naval defense. The crew was not complete due to the requirements of Yugoslavia’s other fleet, but there were enough crew members to carry out task-transport unit within the bay. Aircraft bombed the ship, but the crew several times opened fire on the low-flying aircraft. The crew remained on board until April 17, when the destroyer Zagreb was sunk. It was surrendered to the Italian navy which used it as a training ship under the new name Marco Polo. After the capitulation of Italy in 1943, the ship lay abandoned in Venice and began to decay. Its equipment was looted and at the end of the war, it was barely floating and was serving as a bridge in one of the Venetian canals. At the request of the Yugoslav government and the ship was returned to Tivat. Immediately its restoration was begun in the Sava Kovačević marine-technical repair bureau. The crew was carefully chosen because a military enlistment lasted four years. Repairs began on 21 April 1947, and finished on 17 December 1948.

The ship was ready for sailing, and served as part of the Vojnopomorskog school center in Divulje. With cruises began immediately and continued to the present day, being the right landing classroom. In 1956 and 1957, further general repairs and reconstruction of the ship were done in Tivat.

The ship was completely gutted, and its complete inventory and a mast were replaced. The deck was dismantled, new equipment installed and new sails were added. Ten years later, the ship was completely rebuilt and modernized once more in Tivatin Arsenal. The Jadran sailed to Barcelona in 2008 as part of an event organized by the International Union for Conservation of Nature for the 2008 World Conservation Congress. It sailed with 20 other sailboats, ranging from schooners to catamarans, and two research vessels. Jadran is a barkentine with a displacement of 737 tons and a length of almost 60 meters. The beam reaches 8.90 meter, intermediate draft is 4.05 meter, the main mast height 39.1 meter, and the deck surface totals 93.3 m2. Total length of rope is 11 kilometers. The main motor is the “burmajster-alpha” 353 kN and develops a maximum speed of 10.4 knots. On the sailboat, there are three single, two double and three four-person cabins, one 12-berth and one 30 berth space.