It is almost untouched, pristine, remote and quiet. Region called Kučka Krajina or sometimes Žijovo (the Region of Kuči – a Montenegrin clan) situated north-east of Podgorica the capital of Montenegro, next to the Albanian border, is one of not so known gems of the Montenegrin Dinarids. In fact this is a vast karstic plateau (povrs) from which more groups of summits, single mountain-like summits and mountains rise.

While some Montenegrin sources consider this group a western continutation of Prokletije mountain range (some Montenegrin Government papers even call them Kučke Prokletije, Prokletije of Kuči), because they share more similarities to neighbouring Malesija e Made and Prokletije/Bjeshet e Nemuna in Albania, the sources from other geographical schools and mountainering clubs, as well as old JNA (former Yugoslav National Army) maps keep the name Prokletije for central parts of Prokletije, only, namely to a montain range that stretch east of Cijevna river to Cakor mountain pass, not even counting NE extensions of the range over Hajla and Žlijeb mountains.

Because of present status of three people-three opinions-three politics this page talks about Mountains of Kuči as a separate group, part of Montenegrin high karstic Povrsi i brda (High mountains and plateaus) region. Along its western side, rivers of Moraca and Mala rijeka (Small river) and road Podgorica – Lijeva Rijeka – Verusa, make the limits of the area. River Cijevna and vast river valley of Zeta make south and southwestern borderline of Kučka krajina (area of Kuči). To east, the area extends to the summits along Montenegrin-Albanian border and a smaller mountain ridge that enter into Albania (over Vermoshi) and finally, from the north side the first neighbour of Kučka krajina is Komovi mountain group. Mountains of Kuči area are connected with ranges of central Prokletije at theirs´ northeastern side – starting east of Vila mountain and Rikavačko lake in Kučka krajina, and continuing over mountains of Vermosh in Albania and Maja e Grebenit (1,842 meter) they meet Prokletije of Gusinje and Plav area (Trojan and Popadija) more to the east. On northern side Kuci mountains are connected to Komovi and Planinica-Mojan mountain ridge with another mountain ridge. The physical features of Kučka Krajina Mountains show many traces of glaciation, as it is case for Prokletije mountain range. Also the relief of the group is very indented. Like the main part of Prokletije, which shape resulted from a colisiom between Dinaric and Sara-Pindus tectonic plates, the mountains in Kučka krajina too, deviate from usual Dinaric Alps´ NW-SE stretch and they stretch here in all directions – no dominant direction (see attached map – a chaotic disposition is visible there). The highest summit of Kucka Krajina Mountains is Surdup with 2,184 meter. There are more than 15 summits higher than 2,000 meters here. Because the mountains/summits rise from already elevated undulating plateau you will not always have feeling of such hight when looking the mountains of the region. But despite the false feeling of their real height they show a full high-mountain physionomy – sharp tops, glacial ridges, glacial chasms, lakes and valleys. The wide glacier that stretched over the plateau of Kucka krajina in the older geological period was up to 200 meters thick. Only northern, and even more, the southern parts of Kučka krajina mountains have more woods.

“The general aspect of Montenegro is that of a succession of elevated ridges, diversified here and there by a lofty mountain peak, and, in some parts, looking like a sea of immense waves turned into stone”

The most of the region is woodless, a magnificent mix of wild carstic and glacial structures and features combined with nice green grassy pastures. On some maps and some literature the whole area is also called Žijovo or Žijevo (read: Zhijevo) after one mountain (area) in the region. Though, many writers are trying to standardize theirs´ name, by more often using the name Kučka krajina mountains, or simply Kuči mountains (Kučke planine). Still partly preserved stock-breeding tradition on these mountains give pastoral and picturesque image to the region. Katuns (“katun”, singular), small clusters of shepherds´mountain huts, can be found throughout the area, though in smaller numbers than before.

Lakes in the Kučka Krajina

This lake, together with central cluster of Mountains of Kucka krajina in the background make one of the most famous and most pictoresque scenes in the area. The lake is situated by the road from katun Mokro to Brskut or to Ubli, at 1,440 meter above sea level. The lake is 210 meter long, 130 meter wide and 13-16 meter deep. The length of the shore is 585 meter, surface area is 1,982 sq meter. The lake is of glacial origin. Its waters are home to abundant aquatic vegetation. One of the most famous endemic inhabitant of this lake was a triton – a reptile known in hydro biological literature as tritus alpestis montenegrinus, which looks like a little crocodile. Situated around the lake is katun Jezera and nearby katun Popovica. The lake is popular especially in summer as an ad-hoc camping place, or nice place to refresh by swimming in its waters. Northern side of the lake is rocky, while southern one is more gentle and covered with vegetation. Lake is also used as a watering place for livestock in summer. Water of the lake is clear and transparent, visibility up to 4 meters deep.

Next to Bukumirsko, 5-10 minutes walk away from it. Dugacko lake is also called “Malo” Bukumirsko jezero, it is a periodical pond, 200 meter long, next to Ivanovica (family) huts in katun Jezero. The lake is present here during times of abundance of water, especcially after snow melting. Then in early summer it dries out. 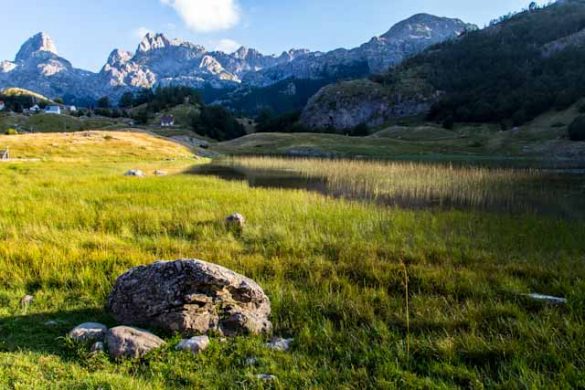 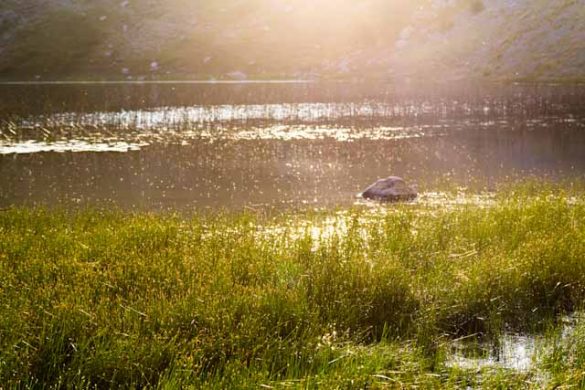 It is the largest lake in mountains of Kucka krajina group, 525 meter long, 230 meter wide and 14 meter deep. It is situated between Sirokar area (read: Shirokar) which is a pass/plateau where katun Sirokar Ljakovica (1,765 meter) is situated, and Vila mountain (2, 093 meter).

Water torrents from surrounding mountains bring lots of water but also lots of land material into deep where the lake is situated and into the lake itself so Rikavacko lake is becoming shalower each year. The lake is predominantly of glacial origin but there were also some tectonic influences present in its shaping. It is accessible in 30 minutes by steep road from Sirokar Ljakovica or from the south from katun Korita. Next to the lake is katun Rikavac (1,403 meter). The lake is very close to Albanian border, just a few hundred meters away from it. People do fishing here too on trout.

This lake better say a pond is situated between Treskavac and Surdup mountains. The exact location of this pond is Jezerce high valley and plateau at 1,867 meter north of Treskavac pass. This plateau there is a spring and Jezerce pond, where endemic tritons live. This site is one of beginning points where from glaciers descend from the mountains by valleys, to the east in direction of the Bukumirsko lake and to the west to Bljusturni do.

Rivers in the Kučka Krajina

River Cijevna (Cem, Cemni in Albanian) is left tributary to Morača river. The spring of Cijevna is located west of Trojan mt. (2,183 meter) in Proletije mt. range, and the river flows from there in SW direction as Cem Selcit through Malësi e Madhe region in Northern Albania. After Cijevna reaches the border of Montenegro, and finally enters Montenegro south of Suka Mizdrakut (1,144 meter) mt. it forms a canyon with high and steep sides. As the river flows more to the west the canyon becomes wider and its sides lower until Cijevna enters Zeta plain close to Dinoša settlement few kilometers SE of Podgorica the capital of Montenegro. From here another very attractive part begins, as Cijevna had carved its course in low laying horizontal rock slabs in Zeta plain (Ćemovsko polje-field) thus forming a miniature canyon, a kind of half-opened natural tube (and really, in local language the noun cijev stands for english tube and this may be the explantion for the origin of the river name). Despite the fact that Zeta plain is very hot place in summer Cijevna river stays very cold all year round. For the most of its length its water is drinkable.

Mala rijeka is a left tributary to Morača river , flowing into Moraca in the village of Bioče. “Mala rijeka“ means „Small river“. For the most of its lenght its river bed is a canyon straitened between Vjetrenik mountain (west side) and Kučka krajina Mountains (east side). While upper parts of its river bed receive a lot of fresh water from the mountains in the area of Vasojevići clan (area around Komovi mountains, north of Kuči region), the lower parts of Mala rijeka dries out in summer and waters flow underground below surface. In spring during snow melting Mala rijeka usually brings very strong torrential waters to Morača river. The river and spring waters in the area are very cold, measuring 5°C, at average. Western sides of Mala rijeka around Vjetrenik mountain belong to Bratonožići clan, another of Montenegrin clans. This is one of the most underdeveloped parts of Montenegro, mostly because of difficult rocky terrain not suitable for agriculture. Such conditions make life very hard for local people. In this area, alongside Mala rijeka canyon passed an old road from Zeta valley inland, for long time the only major connection from Montenegro to Sandžak (Sandjak) area, Kosovo and central Serbia.

Accommodation in the Kučka Krajina range

The closest place to the Kučka krajina mountains is the village of Veruša, which also has a central location against the mountains of Komovi and Prokletije. The mountains are mainly visited by visitors to the capital of Podgorica, who visit it as a day trip. This is because it is the nearest mountain range of the city, with a distance of 40 kilometers, about 1,30 hours drive. So staying in Podgorica is also an option. The mountain is lacking the name of the nearby mountains of Komovi and Prokletije, and is generally also much less affected. The Bukumirsko jezero with its picturesque landscape and easy access does put the mountains in an ever increasing interest. What has led to the fact that accommodation in the Katun’s at Bukumirsko Jezero and surroundings are gradually being offered. 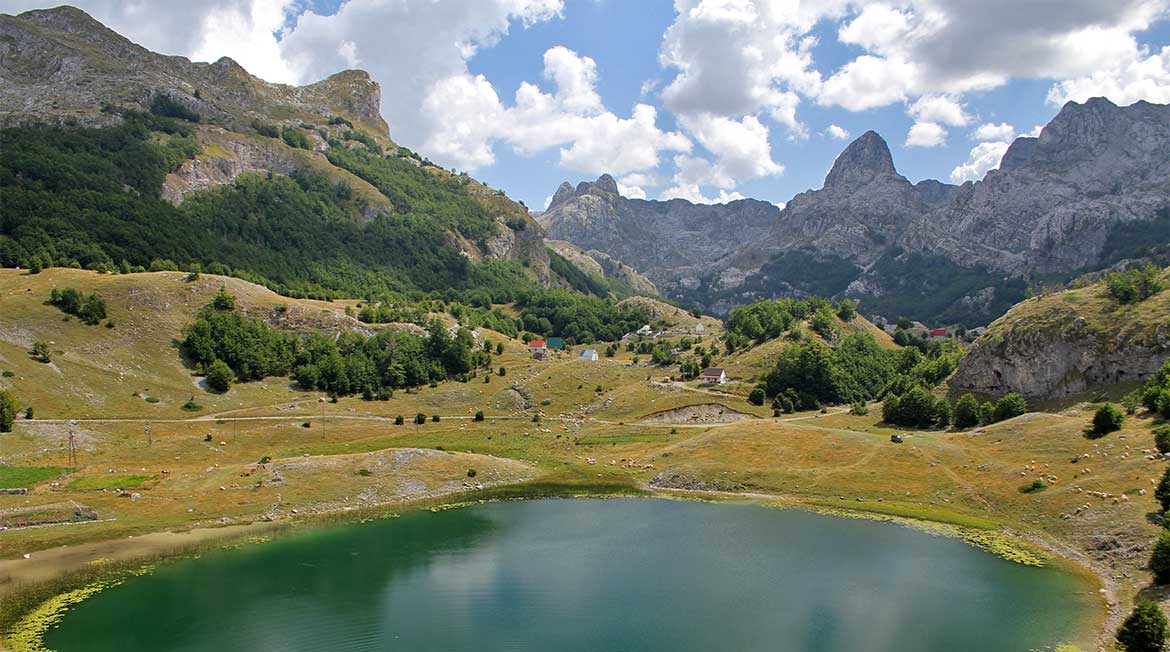 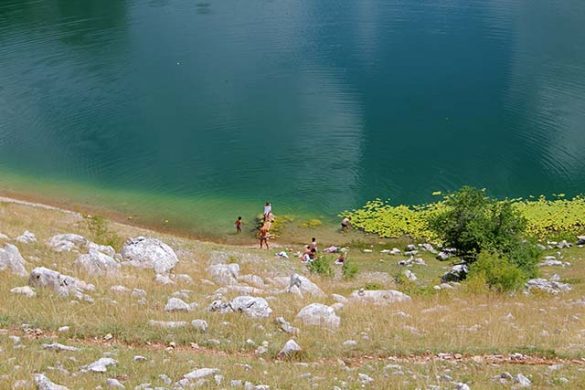 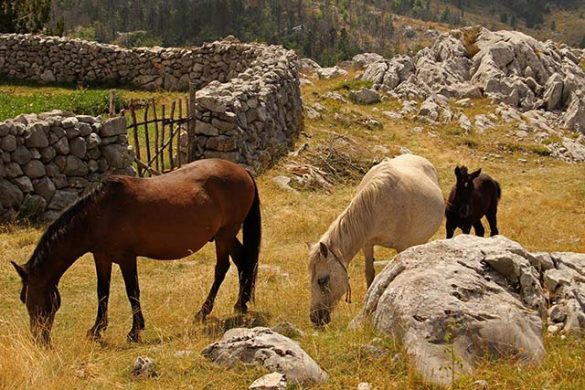