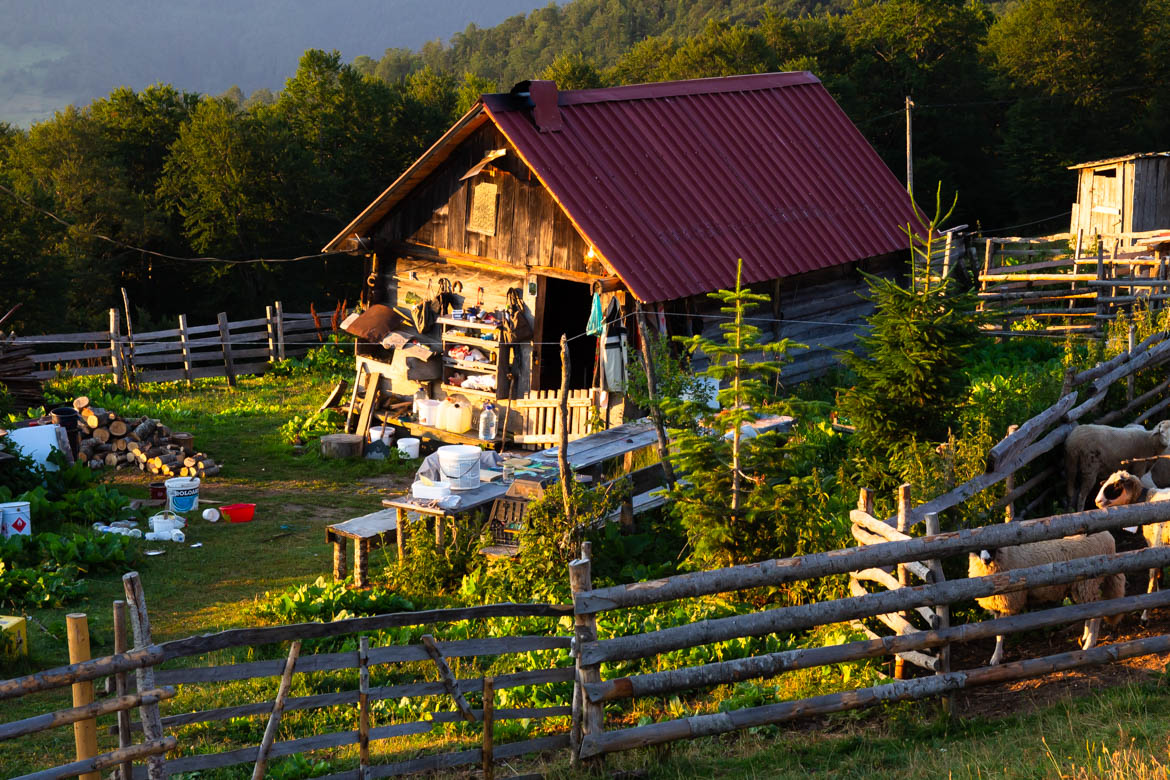 Katun’s are farmer settlements typical for the mountain regions of Montenegro, especially the northern parts. These temporary summer settlements were created mainly in the valleys and ravines of the mountain area’s with rich pastures where there was enough water.

Katun’s are consisted of huts, cottages and outbuildings such as barns made of natural materials: wood, stone and straw. Katuns are mostly rectangular with the heart in the center and the floor made of soil.
Herders, mostly sheep, moved to these Katun’s in spring and summertime to live a nomadic lifestyle during these months. The animals would graze on these high mountain pastures and provide the living families are the necessities they would need during these months and the upcoming tougher winter times. Through history this way of living developed a special culture and customs that itself became part of essence for Montenegrin culture.

Today working Katun’s still exist but the numbers are sadly declining. Like most rural life, the younger generations tend to prefer a more urban lifestyle. Traditional food is simple, all organic and made from locally sourced ingredients. Dairy products such as milk, yoghurt, and cheeses are available in abundance. Many advocate that preserving some form of Katun life is critical to preserve this cultural heritage for Montenegro. In the passing years, a small part of the functioning Katun’s started to combine small-scale farming along with rural tourism. Katun’s have very basic conditions, and have been arranged in that manner for centuries. Some places started to adopt it more commercial and took the naming of Eko Katun’s.

These function more like traditional touristic accommodations where guests stay in huts as there isn’t the family interaction or Katun life that would be associated with the family Katun’s. Most of them including facilities as small restaurants, outdoor patio’s and accompanying facilities. Water supply in the most Katun’s is low especially in summer months due to overall lack of water in the more mountainous area’s.
Below are the finest Eko Katun’s that can be found in Montenegro, based on location, accommodation and facilities. Especially the surroundings are important and the availability of numerous hiking and biking trails, as well as open pastures. True touristic Katun accommodation still exist but through the nature of it and lack of facilities that are not suitable for all, so only Eko Katun’s are being selected.

Eko Katun Stavna represents an ideal starting point for all hiking tours toward the Komovi mountain range. This are is known for its high peaks: Kučki Kom 2487 meter, Rogamski peak 2033 meter, Ljevorečki Kom 2483 meter and Vasojevićki Kom 2461 meter. All hiking routes are marked an mapped. Ten chalets are in the near vicinity of beech forest with breathtaking view of mountain Komovi, which are only 2 kilometer away. Architects devoted special attention during the construction of the settlement so there is no distortion of the visual environment of the mountain. Therefore, main building materials used were noble wood and stone. The surrounding of the settlement is a small botanical garden with over three hundred different plant species. There are numerous hiking and biking trails, as well as open pastures. Outdoor recreation enthusiasts, mountain climbers, scouts and mountain bikers can find shelter and rest in the settlement. The Katun offers a small restaurant were visitors can stop for a moment and refresh yourself with a glass of spring water, home-made brandy and good homemade food.