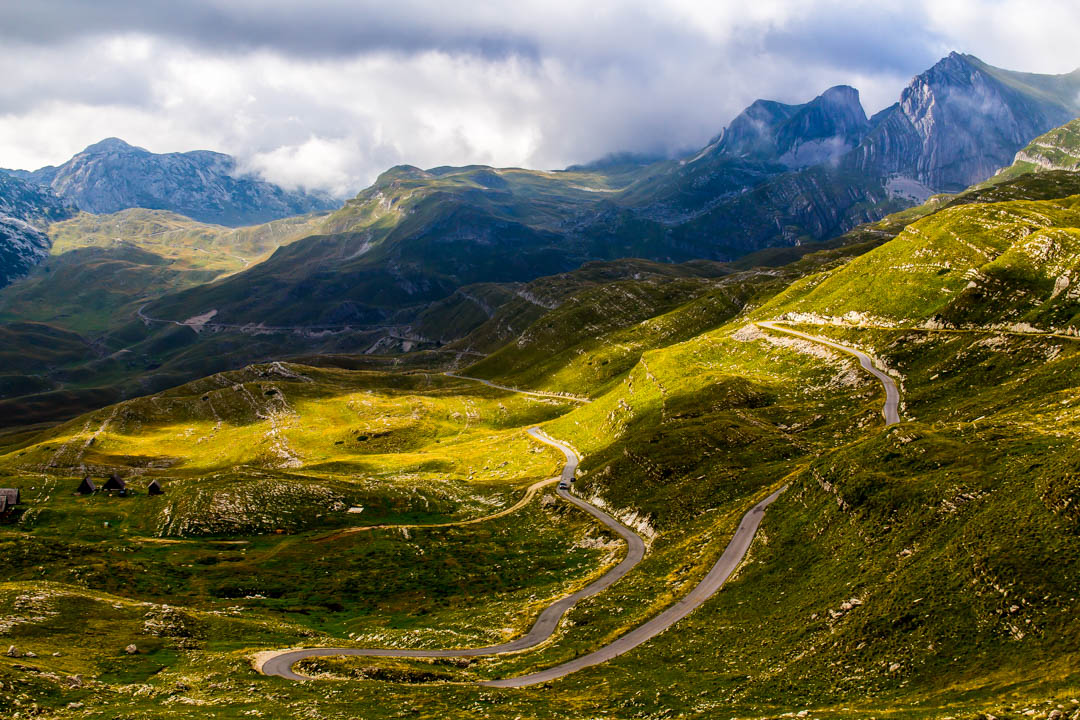 There’s something soothing about taking a long drive on the open road. You don’t even necessarily need a destination in mind. Just the freedom of the road ahead of you is enough to blow out the cobwebs and make you feel alive. Be it a road trip through the canyons, across the mountains or even to the city, a long drive can be just the cure you need.

Montenegro’s diversity gives u plenty off opportunity. It could be argued that with the lack of big industry and the small inhabitant numbers and the country elevation character all drives in Montenegro could be described as scenic.

But some roads really will bring you unforgettable memories. And those will be highlighted below ;

The serpentine’s are known to have the most beautiful panoramic views of the Boka Kotorska bay, from the height of over 1000 meter above sea level. This road has been featured on Top Gear and high-end auto commercials. This narrow switchback road can be treacherous. With inward leaning concrete barriers on one side and jagged rock on the other, multiple vehicles may have to reverse their way back up the road when meeting a bus or construction vehicle coming the other way. So visiting on a time without a lot of traffic is advised. That would be in the early mornings or the late sunsets. Luckily these times also brings the most scenic views of the Boka Kotorska bay. The sun slowly rise or sets in, casting shadows over the cliffs, cities and islands. Especially with sunset, often the sky will be painted with a palette of the most beautiful colors. This spectacle of light is harmoniously taken over as night takes over from the day. Twinkling lights shine through the bay and show all the places that can be found there.

The road along the Morača river canyon is one of the most spectacular roads in Montenegro. Located in the center of Montenegro, the road traversing the canyon is called E65. Riddled with countless cliff-side bends and tunnels, this road is basically out to get you, but if you survive you’ll be blown away by the beauty of the landscape that surrounds you.

Morača river canyon separates Moračke planine range from Sinjajevina range. It’s located between Podgorica and Kolasin. This part of the canyon is called “Platije”. The highway is built along the edge of the narrow canyon. The “Platija” is 1000 meters deep on average and the mountainous Morača’s tributaries also flow through the canyons with the banks often as high as up to 1000 meters.

3) The road through the Boka Kotorska

Painters, poets, scientists, tourists, they all experienced the Boka Kotorska in a different way. Everybody finds motive or inspiration for oneself, experiences it as something special, unusual, prodigious. And the Boka Kotorska is, which was confirmed by signing the Kotor–Risan bay on the list of World’s natural and cultural heritage of Unesco, and accepting the Bay in the Club of the most beautiful world bays. The entire length of the Boka Kotorska bay (literally “inlet” and also known as the Bay of Kotor) is 15 nautical miles or 28 km. The bay is naturally divided into four smaller parts: the Herceg-Novi-bay, Risan-bay, Kotor-bay and Tivat-bay. The Boka Kotorska is full of differences: high mountains and extensive sea, continent and Mediterranean, two civilizations, east and the west.

All those differences in the Boka Kotorska unify. It’s easier to see that harmony of differences in the historical and cultural heritage than in nature. We can notice the presence of many civilizations, cultures, and styles – prehistoric fossils, iliric epoch, antique, prelatin, latin, gothic, renaissance, baroc. All this scenery makes it an unforgettable drive. Especially the parts of the Risan-Bay and Kotor-bay, were the cliffs are the highest and sights the most scenic. Kotor with it’s old town fortifications, Perast with it’s fairy tale islands of Gospa od Skrpjela and Sveti Djordje, the Sopot spring near Risan that appears after heavy rain 20 meter above the Bay.

The road runs through and along the lake of Piva over a dozen kilometers. This lake, the second largest in the country by its area, is a man’s creation. It was born from the construction of the Mratinje Dam which, by flooding the canyon of the Piva river, resulted in the formation of a large reservoir of freshwater.
At the north end of the lake, the road changes from shore before continuing along the Piva canyon. After a dozen kilometers and beautiful panoramas, it reaches the small border crossing of Šćepan Polje to enter Bosnia and Herzegovina. It is in this particular place that the Piva River and the Tara River come together to form only one river called Drina. This site is also the starting point for rafting excursions organized by local agencies in the canyon of Piva.

Prevoj Sedlo is a high mountain pass at an elevation of 1.907 meter above the sea level, located in the Durmitor national park. The road over the pass links the municipalities of Žabljak and Plužine. It’s one of the most spectacular roads in Montenegro. On the summit there are fantastic views on both sides, with a nice panorama of the Valovito Jezero lake and the sharp rock of Stožina (1,905 meter). The road is winding, in some places only wide enough for one vehicle and unprotected by guardrails. It’s the highest paved mountain pass in the country. The road, although narrow, is completely paved now and when you travel off-season, the silence and beauty of nature is absolute. Because of the road’s high elevation, late spring snow is a common appearance. In winter time because of the snowfall it could be closed.

The Tara canyon, also known as the Tara river gorge, is the longest canyon in Montenegro. It is 82 kilometers long and is 1,300 meters at it’s deepest, making it the deepest river canyon in Europe. The Tara river cuts through the canyon. The most well known landmark is the famous Đjurđevića bridge, the highest bridge in Europe in the past. The bridge stretches above the Tara river canyon, which is the deepest in Europe, the second in the world, just after the Colorado. This place is a wonderful ‘gate’ to the Durmitor National Park. It’s not surprising that this place is on the UNESCO World Natural Heritage Site. Its building was started in 1937 and finished after 3 years. At the moment of coming into being it was the biggest ferroconcrete arched bridge, and required setting the highest wooden scaffolding in the world. The culmination of this winding long road ride through the canyon catching glimpses off the crystal clear emerald water of the Tara river is stunning. River Tara has a lot of special places, but the most valuable ones are its cascades. Roar of some of it’s cascades can be heard from the very edge of the canyon and listening carefully when driving.

What’s more interesting and giving a special atmosphere, is that many species have succeeded in guarding some of its primeval qualities, which were characteristic for times past. Thus, in the Tara valleys you can find some leftovers of the tertial flora right out of the last glacier period. Beside this flora, the plant life in the canyon is characterized by forests having very different species: cerris, ash tree, beech, black beech and birch. Great parts of the canyon are overgrown with needle trees, a special place being reserved for the black pine. The most interesting specimens of the black pine are those which hang on naked stony slopes by its very roots, and thus hang over precipitous abysses. But, the most famous locality of the black pine is the locality where the black pine is part of the primeval forest, in a part of the canyon called Crna poda.