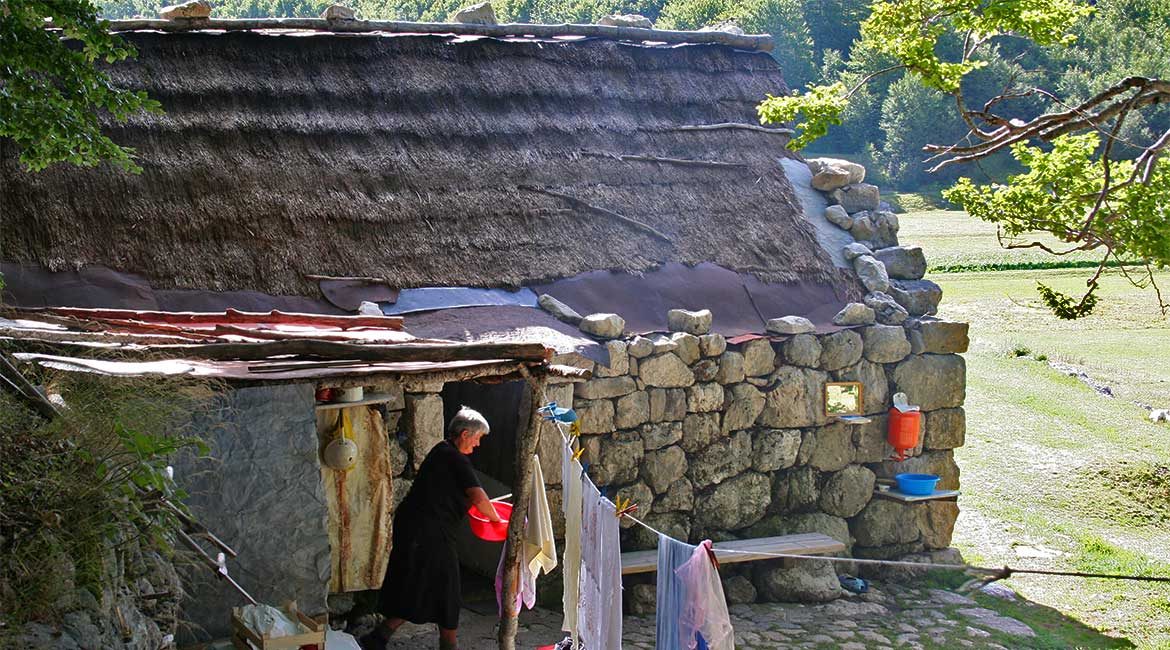 Slavs have lived in the area of Montenegro since the 6th and 7th centuries in the medieval state of Doclea. Montenegro in MontenegrinCrna Gora got its present name during the rule of the Crnojević dynasty. After the Christmas Uprising (1919), which saw fighting between the pro-Petrovic guerrillas and the Karadjordjevic troops, supporters of Montenegrin king Nicholas I expressed opposition to unification with Serbia because it meant total disappearance of Montenegro, their leader Krsto Zrnov Popovic wanted to unify, but under the rule of king Nicholas I. After World War II, many Serbs of Montenegro began to identify themselves as Montenegrins. Following the collapse of Communism in Yugoslavia, however, some Montenegrins began to declare as Serbs again, while the largest proportion of citizens of Montenegro still preserved their Montenegrin self-identification. This has deepened further since the movement for full Montenegrin independence from the Federal Republic of Yugoslavia began to gain ground in 1991, and ultimately narrowly succeeded in the referendum of May 2006 (having been rejected in 1992).

In the 2011 census, around 280,000 or 44.98% of the population of Montenegro identified themselves as ethnic Montenegrins, while around 180,000 or 28.73% identified themselves as Serbs. The number of “Montenegrins”, “Serbs” and “Bosniaks” fluctuates wildly from census to census, not due to real changes in the populace, but due to changes in how people experience their identity. According to the 2002 census, there are around 70,000 ethnic Montenegrins in Serbia, accounting for 0.92% of the Republic’s population. In addition, a significant number of Serbs in Serbia and Bosnia-Herzegovina are of Montenegrin ancestry, but exact numbers are difficult to assess – the inhabitants of Montenegro contributed greatly to the repopulation of a depopulated Serbia after two rebellions against the Ottoman Empire in the early 19th century, with half of the population of Sumadija and its surroundings being populated by people originally from Montenegro, and with several prominent individuals of the Serbian 18th & early 20th century intelligentsia and entrepreneurs being descendants of people originally from Montenegro.

On 19 October 2007 Montenegro adopted a new Constitution which proclaimed Montenegrin (a standardized variety of former Serbo-Croatian) as the official language of Montenegro.

Slavs settled in the Balkans during the 6th and 7th centuries. According to De Administrando Imperio, there existed three Slavic polities on the territory of Montenegro: Duklja, roughly corresponding to the southern half; Travunia, the west; and Serbia (or Rascia), the north. Duklja emerged as an independent state during the 11th century, initially held by the Vojislavljević dynasty, later to be incorporated into the state of the Nemanjić dynasty.

The region previously known as Duklja later became known as “Zeta”. Between 1276 and 1309, Serbian queen Helen of Anjou, the widow of the Serbian King Uroš I, ruled Zeta, where she built and restored several monasteries, most notably the Monastery of Saints Sergius and Bacchus (Srđ and Vakh) on the Bojana river below Skadar (Shkodër). The Venetian name Montenegro, meaning “black mountain” occurred for the first time in the charter of St. Nicholas’ monastery in Vranjina, dating to 1296, during Jelena’s reign. Under King Stefan Milutin (reigned 1282-1321), at the beginning of the 14th century, the Archdiocese in Bar was the biggest feudal domain in Zeta.

In the late 14th century, southern Montenegro (Zeta) came under the rule of the Balšić noble family, then the Crnojević noble family, and by the 15th century, Zeta was more often referred to as Crna Gora (Venetian: monte negro). In 1496, the Ottomans conquered Zeta and subsequently established a sanjak that was subordinated to the Sanjak of Scutari. Ottoman influence remained largely limited to urban areas, while various tribes in the highlands emerged as districts out of reach of the Ottomans. These tribes were at times united against the Ottomans, under the leadership of the Metropolitans of Montenegro, the so-called “prince-bishops”.

The Montenegrins maintained their independence from the Ottoman Empire during the Ottoman’s reign over most of the Balkan region (Bosnia, Serbia, Bulgaria, etc.). The Montenegrins were gathered around the Metropolitans of the Cetinje Metropolitanate, which led to further national awakening of the Montenegrins all around. The creation of a theocratic state and its advancement into a secular and independent country was even more evident in the late 15th and early 16th centuries.

The rule of the House of Petrović in the 18th and 19th century unified the Montenegrins and established strong ties with Russia and later with Serbia (under Ottoman occupation), with occasional help from the Austro-Hungarian Empire. That period was marked by numerous battles with Turkish conquerors as well as by a firmer establishment of a self-governed principality.

In 1878, the Congress of Berlin recognised Montenegro as the 26th independent state in the world. Montenegro participated in the Balkan Wars of 1911–1912, as well as in World War I on the side of the Allies.

Montenegro unconditionally joined Serbia on November 26, 1918 in a controversial decision of the illegal Podgorica Assembly, and soon afterwards became a part of the Kingdom of Serbs, Croats and Slovenes, later renamed as Yugoslavia. A number of Montenegrin chieftains, disappointed by the effective disappearance of Montenegro, which they perceived to have resulted from political manipulation, rose up in arms during January 1919 in an uprising known as the Christmas Rebellion, which was crushed in a severe, comprehensive military campaign in 1922–23. Annexation of the Kingdom of Montenegro on November 13, 1918 gained international recognition only at the Conference of Ambassadors in Paris, held on July 13, 1922. In 1929 the newly renamed Kingdom of Yugoslavia was reorganised into provinces (banovine) one of which, Zeta Banovina, encompassed the old Kingdom of Montenegro and had Cetinje as its administrative centre.

Between the two world wars, the Communist Party of Yugoslavia opposed the Yugoslav monarchy and its unification policy, and supported Montenegrin autonomy, gaining considerable support in Montenegro. During World War II, many Montenegrins joined the Yugoslav partisan forces, although the portion joining the chetniks was also significant. One third of all officers in the partisan army were Montenegrins. They also gave a disproportionate number of highest ranked party officials and generals. During WWII Italy occupied Montenegro (in 1941) and annexed to the Kingdom of Italy the area of Kotor, where there was a small Roman community (descendants from the populations of the renaissance Albania Veneta). There was an attempt to create an independent Montenegro, but it was stillborn and remained a occupied territory. Montenegro was ravaged by a terrible guerrilla war, mainly after Nazi Germany replaced the defeated Italians in September 1943.

When the second Yugoslavia was formed in 1945, the Communists who led the Partisans during the war formed the new régime. They recognised, sanctioned and fostered a national identity of Montenegrins as a people distinct from the Serbs and other South Slavs. The number of people who were registered as Montenegrins in Montenegro was 90% in 1948; it has been dropping since, to 62% in 1991. With the rise of Serbian nationalism in the late 80’s the number of citizens who declared themselves Montenegrin dropped sharply from 61.7%, in the 1991 census, to 43.16% in 2003.

Initially, after the fall of Communism in the early 1990s, the idea of a distinct Montenegrin identity has been taken over by independence-minded Montenegrins. The ruling Democratic Party of Socialists (DPS) (reformed communists), led by the prime minister Milo Đukanović and the president Momir Bulatović, was firmly allied with Slobodan Milošević throughout this period and opposed such movements.

During the recent Bosnian War and Croatian War (1991–1995) Montenegro participated with its police and paramilitary forces in the attacks on Dubrovnik and Bosnian towns along with Serbian troops. It conducted persecutions against Bosniak refugees who were arrested by the Montenegrin police and transported to Serb camps in Foča, where they were executed.

However, in 1997 a full-blown rift occurred within DPS, and Đukanović’s faction won over Bulatović’s, who formed a new Socialist People’s Party of Montenegro (SNP). The DPS distanced itself from Milošević and gradually took over the independence idea from the Liberal Alliance of Montenegro and the SDP, and has won all elections since.

In the fall of 1999, shortly after the NATO bombing of Yugoslavia, the Đukanović-led Montenegrin leadership came out with a platform for the re-definition of relations within the federation that called for more Montenegrin involvement in the areas of defence and foreign policy, though the platform fell short of pushing for independence. After Milošević’s overthrow on October 5, 2000, Đukanović for the first time came out in support of full independence and succeeded in his quest by winning a vote on independence on 21 May 2006.

Montenegro was part of medieval Serbia during 12th, 13th and first half of the 14th century. Ottoman conquest of the Balkans resulted in separation from Serbia and re-emergence of Zeta. In the 19th century national romanticism among the South Slavs fueled the desire for re-unification.

The political rift in late 1990s caused the Montenegrin/Serb ethnic issue to resurface. Regarding the issue of independence of Montenegro, voted on a referendum in 2006, the population was roughly divided between ethnic Montenegrin’s (Orthodox, Muslim, and Catholic), Bosniaks, Croats, and Albanians on one side, and ethnic Serbs on the other.

Various notable people in Montenegro supported Montenegrin independence and acknowledged the right of citizens in Montenegro to declare themselves as ethnic Montenegrins. Noted supporters of independence include current Prime Minister Milo Đukanović and the Speaker of Montenegro’s Parliament Ranko Krivokapić. Of the minorities, these include the historical scientist Šerbo Rastoder, a Bosniak from Berane, and don Branko Sbutega (d. 2006), a Croat Roman Catholic priest from Kotor, and the journalist Esad Kočan, of Bosniak descent.

A number of Montenegrins living outside Montenegro, primarily in Serbia, still maintain Montenegrin folklore, family ties and clan affiliation. They remain Montenegrins by these standards, yet at censa they declare themselves mostly as Serbs. Some have risen to high cultural, economic and political positions. Slobodan Milošević, the Serbian nationalist and President of FR Yugoslavia, was of Montenegrin descent, the first generation of his family to be born in Serbia. His daughter, Marija Milošević declares Montenegrin ethnicity, as did his late brother Borislav, former ambassador to Russia.