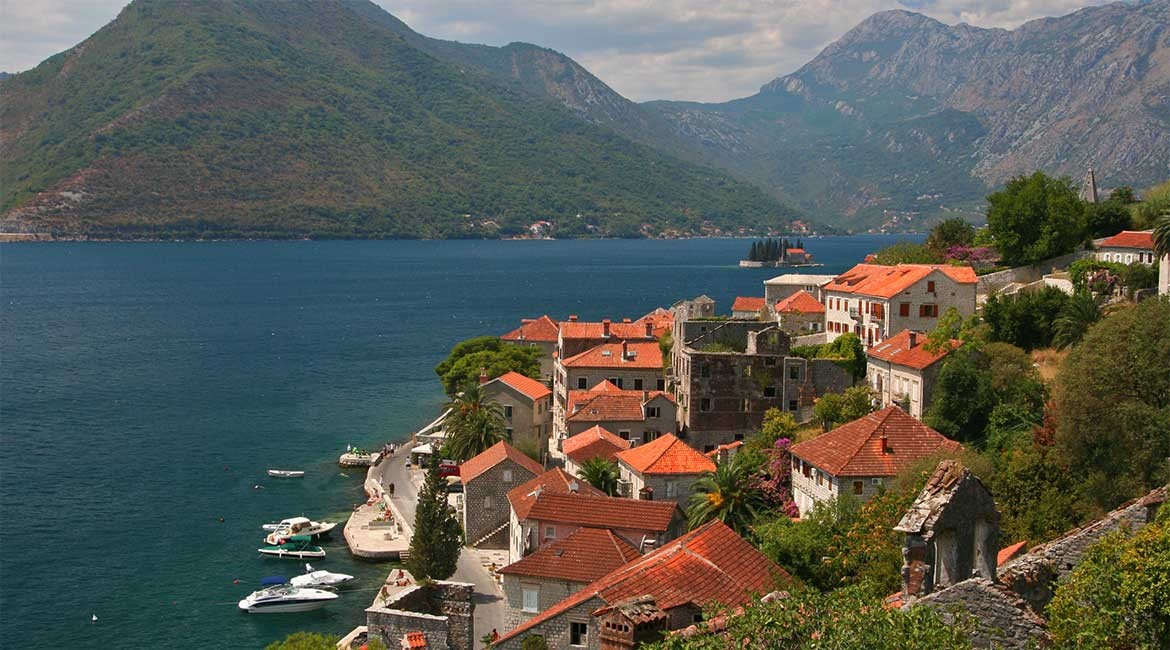 Perast is an old town in the Boka Kotorska. It is situated a few Kms northwest of Kotor. Perast lies beneath the hill of St. Elijah (873 meter), on a cape that separates the bay of Risan from the bay of Kotor (two smaller bays within the Boka Kotorska) and overlooks the Verige strait, the narrowest part of the Boka Kotorska. The average yearly temperature in Perast is 18.3°C, and the number of sunny days is 240 (or around 2,500 sunny hours per year). Near Perast there are two small islands: one is called Sveti Djordje (St. George) island, and the other called Gospa od Škrpjela (Our Lady of the Rock), and each of them has a picturesque chapel. Gospa od Škrpjela (originally called in Venetian “Madonna dello Scarpello”) is particularly interesting given that it is the only artificially built island in the Adriatic, with an area of 3,030 m² — it was built upon a rock (Škrpjel) after two Venetian sailors from Perast found a icon of the Virgin Mary on it in 1452.

Perast is a small quiet town with a population of less than 350 where you can escape Montenegro’s busier seaside resorts such as Kotor and Budva and enjoy a couple of leisurely hours strolling through the streets, and

visiting a few museums and churches. It has a beautiful view towards the peaks around of Orjen and Lovćen mountain ranges. And from here you can visit the church islands of  Gospa od Škrpjela and Sveti Djordje the easiest.

Venice owned the city between 1420 and 1797. Perast (called Perasto in the Venetian language, spoken officially there until the nineteenth century) was part of the Albania Veneta. The city’s sixteen Baroque palaces were mostly built in this period, too, as were its seventeen Catholic churches and two Orthodox churches. One of the biggest churches in Perast is the church of Sveti Nikola, which is located on the main square. It was built in 1691, and it impresses with its bell tower which is 55 meters tall and whose bells in 1713 were the biggest in Europe. The old city does not have a defensive wall, but instead it has nine defensive towers, the most important of which is the tower of the Holy Cross. These were built by the navy of the Venetian Republic in the 15th and 16th centuries.

Perast was at its peak in the 18th century under the Republic of Venice, when it had as many as four active shipyards, a fleet of around one hundred ships, and 1,643 residents. At that time the most beautiful buildings arose in this fortified town.  Many ornate baroque palaces such as the Bujovic Palace, Zmajević Palace, Tripković Palace, Smekja Palace and magnificent dwelling-houses decorated the town of Perast, full of typical Venetian architecture.  The people of Perast were excellent shipbuilders and fishermen and during conflict between Venice and Turkey they were the first line of defense for Kotor, which at that time was the second largest merchant port after Dubrovnik. 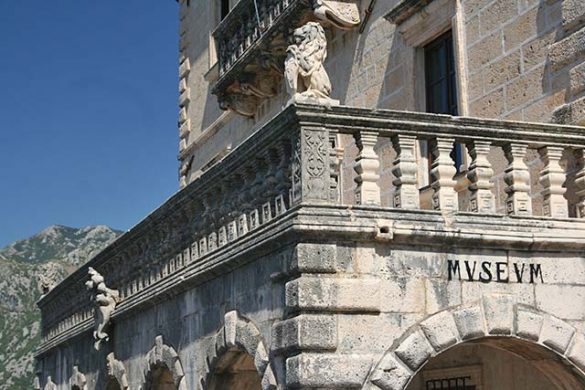 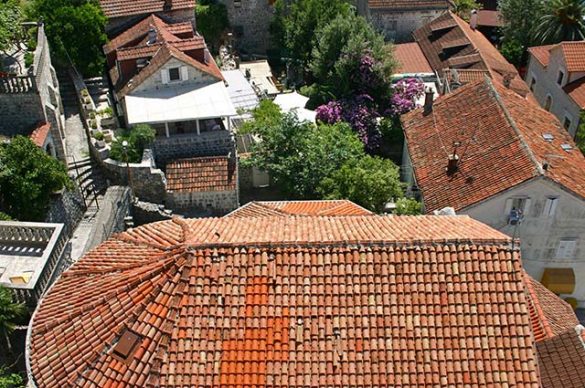 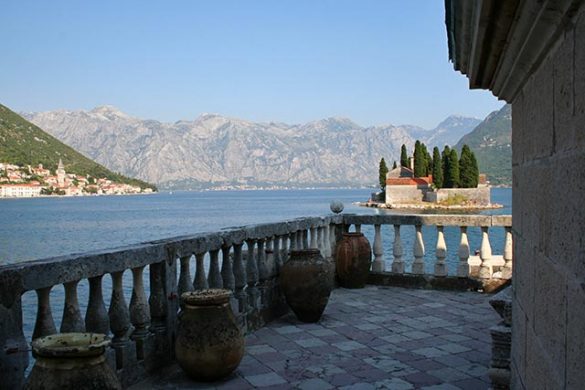 The population has since decreased to 430 in 1910 and around 349 today. The fleet was extinguished by the rise of the steam engine. At the fall of the “Serenissima” (1797) Perast was the last city of the Republic to lower the Venetian flag.

On 12 May 1797, the Republic of Venice ended, but a few places in the Albania Veneta for several months still continued to remain loyal to the Venetian Republic: Perast was the last place of the Republic to surrender. On 22 August 1797 the Count Giuseppe Viscovich, Captain of Perast lowered the Venetian flag of the Lion of Saint Mark pronouncing the farewell words in front of the crying people of the city and buried the “Gonfalon of Venice” under the altar of the main church of Perast.

From 1941 to 1943 during WWII, when Mussolini annexed the territories around Cattaro to the Kingdom of Italy, Perast returned under the influence of Venice. The area was part of the italian Governatorato di Dalmazia and was called Provincia di Cattaro. After 1945 Perast was annexed to Yugoslavia and now is part of the newly independent Montenegro.

The Montenegrins’, Serbs’ and Croats’ languages are all mutually intelligible and derived from Serbo-Croat. The dialect and the vocabulary of the local people are heavily influenced by Italian. Locals usually speak and understand Italian, Russian and English. Reachable by bus and car from Kotor (15 min drive). Public minibuses will drop you off at the main road between Kotor to the south and Risan, later Herceg Novi to the north. Just look for the Blue Line buses, which cost only €1 per ride. As of September 2014, the Blue Line buses picked up passengers in Perast, heading towards Kotor, every hour on the half-hour (09:30; 10:30; 11:30 etc.) until 22:30. There is a small bus stop located directly across from the city square. To ensure the bus stops, it is advised to wave it down. Otherwise, the bus will not always stop.

There are also several open tourist buses driving along the coast after the hop-on hop-off principle. It stops here as well.

Several boat trips from Kotor and Budva takes you through the bay and sets you off at the small island monastery. Here you have a view towards Perast town itself and the surrounding bay area. These boat trips are found many places along the beaches of Kotor and Budva.

Accommodation in Perast is completely in keeping with the historic appearance of the place and the former glory that once prevailed. Its small size and little available space along the narrow coastal strip and the fact that it is Unesco World Heritage has ensured that accommodation is found almost exclusively in the historic houses or monumental buildings. The former villas of the once wealthier seafarers families who are the most striking in this. All have retained their beautiful baroque architecture using a lot of stone. Some changes are the renovations of

the interior to meet the requirements of their chosen accommodation. A bad location is not possible in Perast, at all times the beautiful rich Venetian influence from the past is noticeable, and because of the small size and the fact that it is largely car-free everything is easy to walk. It could be said that Perast has the best quality of accommodation from all Montenegro. Because of the small number of inhabitants it is very quiet outside the high season to stay in Perast, so that the surroundings are all the more alive.

Walking from one end to another is a mere 15-20 min stroll, so no other options than that are really necessary.

Perast doesn’t have sandy beaches, but you can sunbathe there on the numerous small stone and concrete docks jutting out into the sea. Due its small size and almost non existing car traffic makes it a great place to wander around and enjoy the architecture, monuments and surroundings.

In the last census there were: 146 Montenegrins, 101 Serbs, 29 Croats, 10 Yugoslavs, 3 Bosniaks, 1 Macedonian, others: 59,Total: 349. According to the “Comunita’ nazionale italiana del Montenegro”, in Perast actually there are 140 persons who still speak at home the original venetian dialect of Perasto (called “veneto da mar”), and call themselves in the census “Montenegrins”. 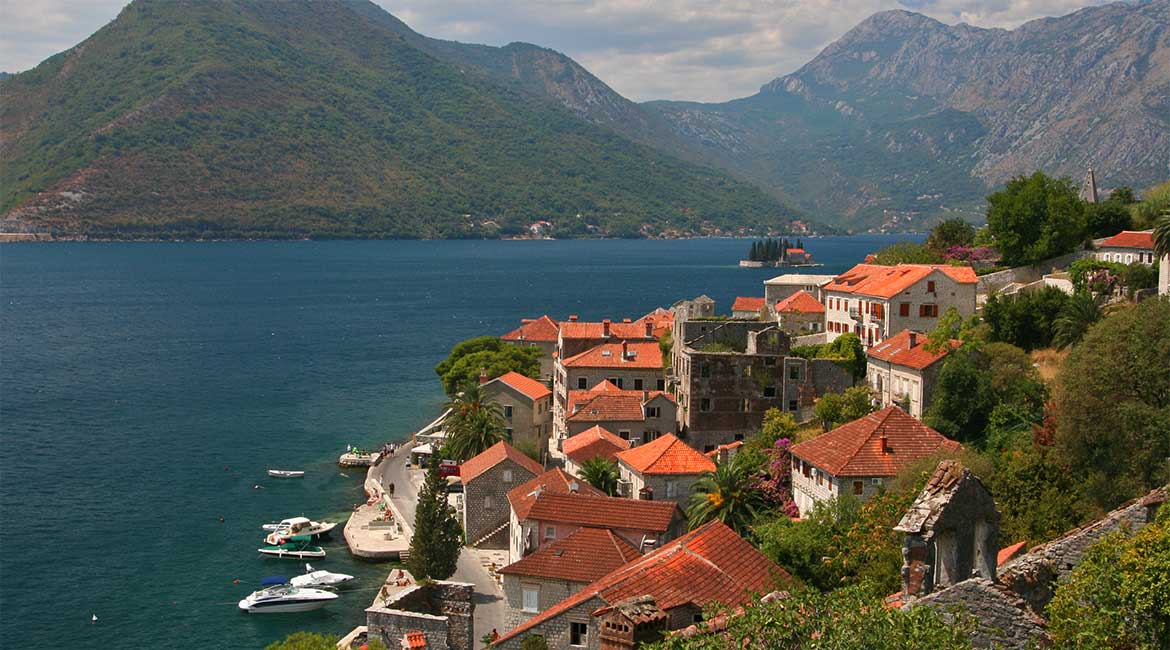 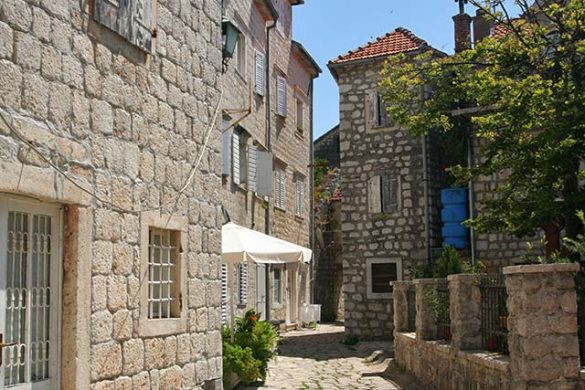 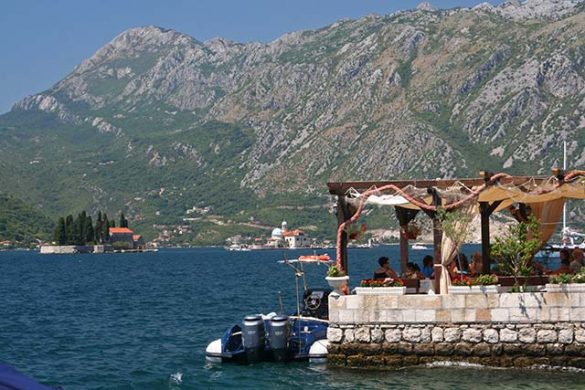 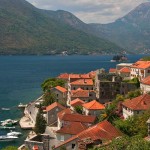 Top three things to do