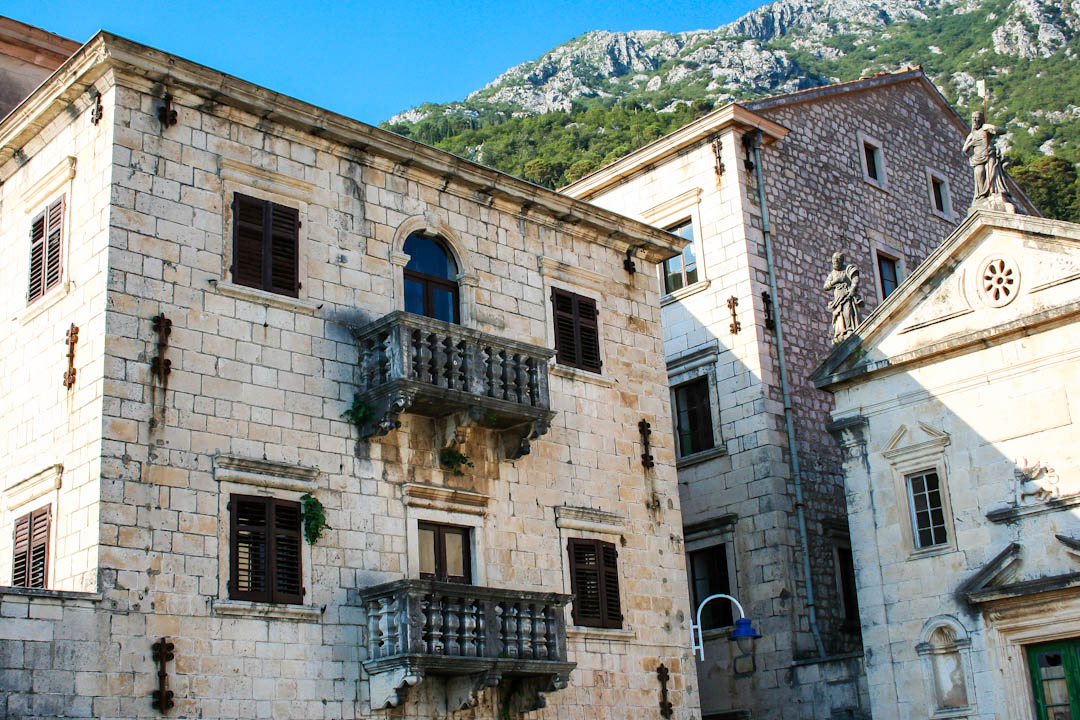 The Smekja palace is located in the central part on the outskirts of Perast, next to the church of Sveti Marko. The palace consists of two parts. The oldest, built in 1764, located between the road along the coast and the old road, and a more recent part that was started in 1764 and completed in the 30s of the 20th century. Smekja palace is the largest palace in Perast. It is completely built of stone from the island of Korčula. The palace has a ground floor, two upper floors and a belvedere. On the level of the first floor there is a large terrace along the entire facade, and on the second and third floor there are balconies with balustrade.

At the entrance of the palace lie the heraldic insignia of Čizmai Kazada, a hand with a stalk of a plant (“čičimak”) with stars, which are the symbol of the Smekja family. The new part of the palace was completed in 1936, with the already existing ground floor and first floor in the same style and of the same material. In both parts of the palace there was a clothing factory in 1936 called “Jadran Perast”. The shape of the building is of simple style, but the door frames and window sills partly reflect Renaissance simplicity in the lines, while the shape of the upper sills with shell-shaped decorative motifs and general decorative features of the building, including the stylization of balustrades with renaissance rosettes also have a touch of baroque.

Here we also find a characteristic of old coastal architecture, a curved closed intersection over the main street that connects the two places. Monumental passage with cross-shaped arches and portal in the green bear the year of construction and the heraldic insignia of the family, and next to the passage there is a smaller portal leading to the lower palace. Smekjas, a family belonging to Čizmai Kazada, as sailors, can be traced very early, already in the second half of the 16th century. Petar Smekja made his family economically successful with the shipping trade company. With the sailing of the ship “Leon Coronato”, he contributed to the economic ties between the Baltic states and Venice in 1746. Already in 1748 he was given the title “konte” (count) and in 1779 the family was admitted to the nobility from Kotor. The palace overlooks the islands of Sveti Đorđje and Gospa od Škrpjela, which are among the most valuable monuments of the cultural heritage of Montenegro.