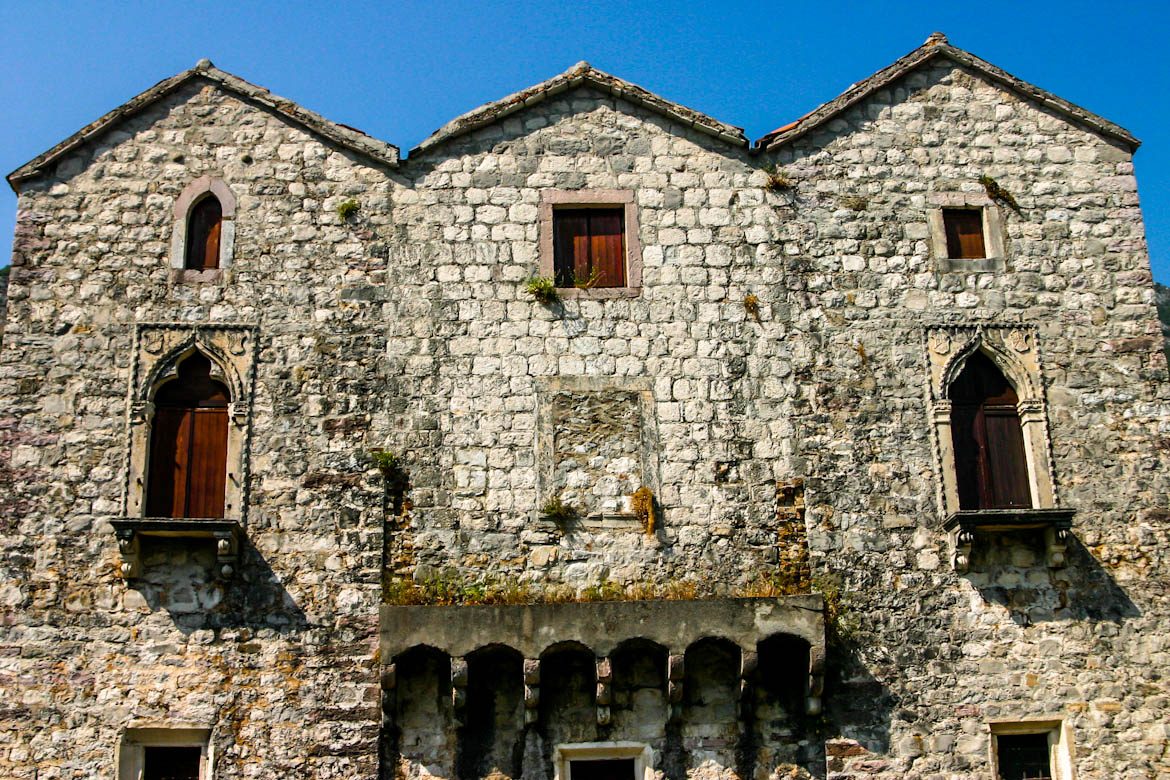 Tre Sorelle palace is situated in the south-eastern part of Prčanj, immediately by the sea. In written sources, the palace was first mentioned in the 16th century as Villa Trium Sororum (three sisters’ villa). The name has remained in use. The palace was a summer residence of the noble family Buća from Kotor, whose coat-of-arms can be found on several spots on the building.

This palace of striking appearance and modest proportions is the oldest building in Prčanj. At the same time it is the only completely preserved gothic palace in the Boka Kotorska, outside of Kotor. It can be dated to the 15th century. The palace consists of three almost identical parts that have separate roofs. Because of its appearance and numerous legends connected to it, the palace was given its name, Palace of the Three Sisters. The two side parts were built at the same time. They have typical gothic windows with pointed arches. These two parts were connected by a terrace, on which the third part with a balcony was later constructed. The entrance was on the first floor and it was reached by an outer stairway. Adjoining the north side of the palace, a chapel dedicated to Sveti Jeronim was built.

The Buća’s used the palace only occasionally, mainly during summer. Like other noble families of Kotor, they had summer residences in Prčanj, Tivat and other settlements in the Kotor area. The palace is part of the legend of the three sisters, the daughters of a noble family of Kotor, who fell in love with the same sailor. The sailor requited love to one of them, promising her ever-lasting love.

This caused the envy and jealousy of the other two sisters. The loved sister, feeling sympathy with their pain, decided not to accept the offered love. Instead, she proposed that the three of them together sacrifice their young lives to their “never-meant-to-be” love, which the sisters accepted. They built a house overlooking the sea, far away from the town, where they spent the rest of their lives. The house had three parts, with a sea facing window on each. When the young man heard of this, he sailed on a voyage from which he never returned. The years were passing, with the sisters never giving up hope of his return. They would spend their days standing by the windows, waiting to see his ship. Then old age came and death knocked on their door. When the first sister died, the other two sisters sealed her window up; there was no need for it any more. The same happened when the second sister died. However, after the death of the third sister, her window remained as it was because there was no one left to seal it up.