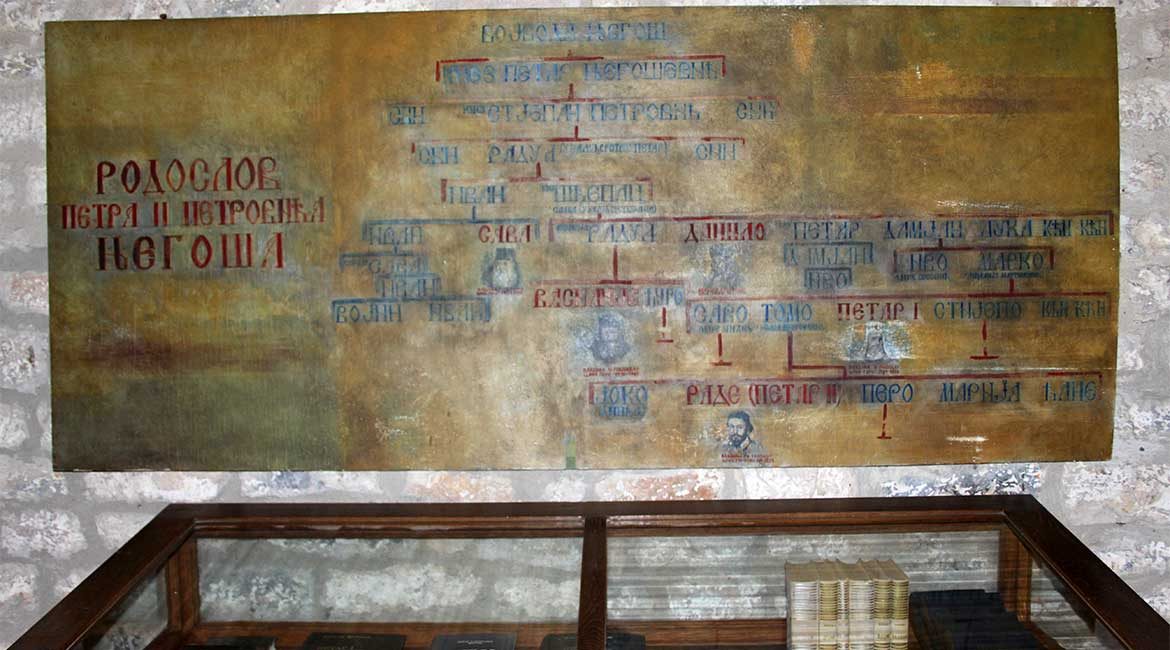 The tribes of Old Montenegro, the Highlands, East Herzegovina and the Maritime were historical geo-political units on the territory of contemporary Montenegro and Hercegovina. The tribes were in turn composed of various clans (bratstva братства, literally “brotherhoods”).

These tribes are usually divided into the tribes of Old Montenegro, the Highlands, East Herzegovina, and the Maritime. Some contemporary Montenegrins include in their identity their descent from the tribes.

The tribes (pleme plural: plemena) were territorial and political units in Montenegro. The tribes are not necessarily kin as they only serve as a geopolitical unit. The Plemena enjoyed especially large autonomy in the period from the second part of 15th century till the middle of 19th century. The first mention of a tribe was in the 13th century in Herzegovina. In fact most of the tribes were formed in the period between the 13th and 15th centuries. Following the Ottoman occupation and dissolution of the Serbian Empire, the formation of tribes formed local self-governing units. In 1853, Danilo II Petrović Njegoš was elected the first secular ruler of modern Montenegro and the Highlands, becoming Knjaz (Prince) Danilo I. Subsequently, the role of the central state was gradually increased and plemena lost their political independence as well as influence. The territorial subdivision of Montenegro was based on territorial clan regions.

The clans (bratstvo, plural: Вratstva) are contemporary patrilineal kin groups which trace their origin to a particular male (in some cases also female) ancestor. Names of bratstva are derived from either names, nicknames or profession of the ancestor. Bratstvo is an exogamous group. In most cases marriage inside a bratstvo is forbidden regardless of the biological distance between the would-be spouses. However, this is not the case with some larger bratstva who sometimes allow endogamous marriages if the genealogical distance between spouses is large enough. In history every clan used to have its assembly, with the heads of families having equal rights in speech and suffrage. In war, the members of the bratstvo (bratstvenici) were obliged to stand together. The size of such units varied in size, ranging from 50 to 800 warriors (1893). Through time the bratstvo would split in smaller subdivisions and acquire separate names. Contemporary surnames of Montenegrins usually come from these smaller units. The clan members tend to guard their family history and many are able to recite the line of ancestors to the originator of the bratstvo. Reference information about origins and history of particular surnames (fractions of bratstva) may be found online as well as in printed form. Currently the political and organisational significance of bratstva has diminished significantly although it still is important in marriages (exogamy rule), some political alliances and a general feeling of solidarity.

Although it is sometimes suggested that plemena consist of bratstva, relationship between pleme and bratstvo is loose. At times of autonomy of plemena, bratstva usually lived concentrated in the same place for long time and therefore formed a part of the pleme. Different bratstva living on the territory of one pleme were often not related to each other. A new bratstvo could be established (and often was) if a stranger sought a refuge (usually because of conflict with Ottoman authorities or because of a blood feud) on the territory of a pleme. Local military force of a pleme consisted of units composed on the basis of local bratstvos. Bratstvo is a kin group, but pleme – territorial one.

Each bratstvo has its own history going back to antiquity and the Middle Ages. Some bratstva claim origin from people who had fled other Serbian regions after the Ottoman conquests, and other are considerably newer and were established as a result of relocations for various reasons (mostly due to blood feuds, krvna osvjeta, or conflict with authorities), from surrounding countries or other regions of Montenegro.

Origins of the plemena are much less clear although some of them are believed to be founded by particular historical people. Many of the mythological founders of the bratstva or plemena were Serb royalty or nobility during the Serbian Empire or Serbian Despotate, for example Vojvoda Bogut (ancestor of the Njeguši/House of Petrović-Njegoš), Vasoje Nemanjić (founder of Vasojevići) and Gojko Mrnjavčević (founder of Kuči).

Some of the tribes originated as counties or smaller village communities first mentioned in the Serbian Empire, the subsequent Fall of the Serbian Empire, the Lordship of Zeta, Serbian Despotate, the Republic of Venice or the early Ottoman Empire. These include Paštrovići (1355), Drobnjaci (1390), Bjelopavlići (1411), Vasojevići (1444), Kuči (1484), Piperi (15th century).

In the late 16th century, monks Damjan and Pavle of Mileševa sent a letter to the pope explaining the geography of the Serbian people (“What is Serbia”), in which several of the tribes were enumerated.

In 1718, after the Peace of Passowitz, 10 tribes of the nahije of Katun, became de facto independent from the Ottoman Empire.

In 1789, Ivan Radonjić, the governor of Montenegro, wrote for the second time to the Empress of Russia: “Now, all of us Serbs from Montenegro, Herzegovina, Banjani, Drobnjaci, Kuči, Piperi, Bjelopavlići, Zeta, Klimenti, Vasojevići, Bratonožići, Peć, Kosovo, Prizren, Arbania, Macedonia belong to your Excellency and pray that you, as our kind mother, send over Prince Sofronije Jugović.”

After Karađorđe Petrović was chosen as leader of the uprising in the Smederevo Sanjak (1804), smaller uprisings also broke out in Drobnjaci (1805), Rovca and Morača.

Prince-Bishop Petar I (r. 1782-1830) waged a successful campaign against the bey of Bosnia in 1819; the repulse of an Ottoman invasion from Albania during the Russo-Turkish War led to the recognition of Montenegrin sovereignty over Piperi. Petar I had managed to unite the Piperi, Kuči and Bjelopavlići into his state. A civil war broke out in 1847, in which the Piperi and Crmnica sought to secede from the principality which was afflicted by a famine, and could not relieve them with the rations of the Ottomans, the secessionists were subdued and their ringleaders shot. Amid the Crimean War, there was a political problem in Montenegro; Danilo I’s uncle, Djordje, urged for yet another war against the Ottomans, but the Austrians advised Danilo not to take arms. A conspiracy was formed against Danilo, led by his uncles Djordje and Pero, the situation came to its height when the Ottomans stationed troops along the Herzegovinian frontier, provoking the mountaineers. Some urged an attack on Bar, others raided into Herzegovina, and the discontent of Danilo’s subjects grew so much that the Piperi, Kuči and Bjelopavlići, the recent and still unamalgamated acquisitions, proclaimed themselves an independent state in July, 1854. Danilo was forced to take measurement against the rebels in Brda, some crossed into Turkish territory and some submitted and were to pay for the civil war they had caused.

Under Prince Nikola I of Montenegro and the Congress of Berlin recognition (1878), the Serb tribes of Piva, Banjani, Niksici, Saranci, Drobnjaci and a large number of the Rudinjani formed the Old Herzegovina region of the new Montenegrin state.

The Montenegrin clans were an important institution in Montenegro throughout its modern history and state creation. Every tribe had its Chief, and they collectively composed a “Gathering” (Збор, Zbor). The elders remained influential political figures up to the incorporation of Montenegro into the Kingdom of Serbs, Croats and Slovenes (Later – Kingdom of Yugoslavia) in 1918. Before the collective unification of Montenegro under the House of Petrović-Njegoš, the Gathering of the Elders was the sole governing body in Montenegro.

In 1904 Prince Nikola Petrović reordered Montenegro into “captaincies”, each organized on a tribal level. Every nahija (compare with Nahiya) had its own Elder (from the corresponding tribe). The tribal assemblies were attended regularly by all grown men from the corresponding clan. The “General Montenegrin Assembly” was the highest political body and a mediator between the Montenegrin people and the Ottoman authorities. It was composed of chiefs of all tribes in Montenegro.

During the Podgorica Assembly which decided the fate of Montenegro as either an independent state (supported by the Greens) or a united part of the Kingdom of Serbia (supported by the Whites), the tribes were divided, even internally. The Greens consisted of the highland tribes of Moračani, Piperi and Rovči, the Katun clans of Bjelice, Cetinje, Cveto and Cuce and the Hercegovinian tribes of Nikšići and Rudinjani. The Greens ethnically declared themselves as Serbs, but did not support, what they saw, as a Serbian annexation of the Montenegrin state. The Whites, supported by the rest of the Serb tribes, won.

During the Second World War, the tribes were internally mainly divided between the two sides of Chetniks (Serbian royalists) and Yugoslav Partisans (communists), that were fighting each other for the rule of Yugoslavia. As a result the conflict spread within the tribal structures.

Jovan Cvijić (1865–1927) listed 21 plemena in the territory of Old Montenegro, 7 plemena in the Highlands, 16 in Eastern Herzegovina and 2 on the Montenegrin coast. The list below also contains many groups which should be classified as bratstva. Note that the territory of contemporary Montenegro consists of several historic regions (Old Montenegro, the Highlands and the Coast) as well as territories that were added to Montenegro comparatively recently (e.g., parts of what used to be Austrian Herzegovina). Old Montenegro, in turn, used to be divided into four districts (nahija). None of these regions and districts are reflected in the official territorial division of contemporary Montenegro.

Tribes and clans of East Herzegovina

Tribes and clans of the Coast land